How should you trade the GBP/USD on October 14th? Simple pointers for Newcomers

During the European trading session, the pair went up by 240 points which didn't make sense, and it was impossible to know when it started because it didn't drop to 1.1024. 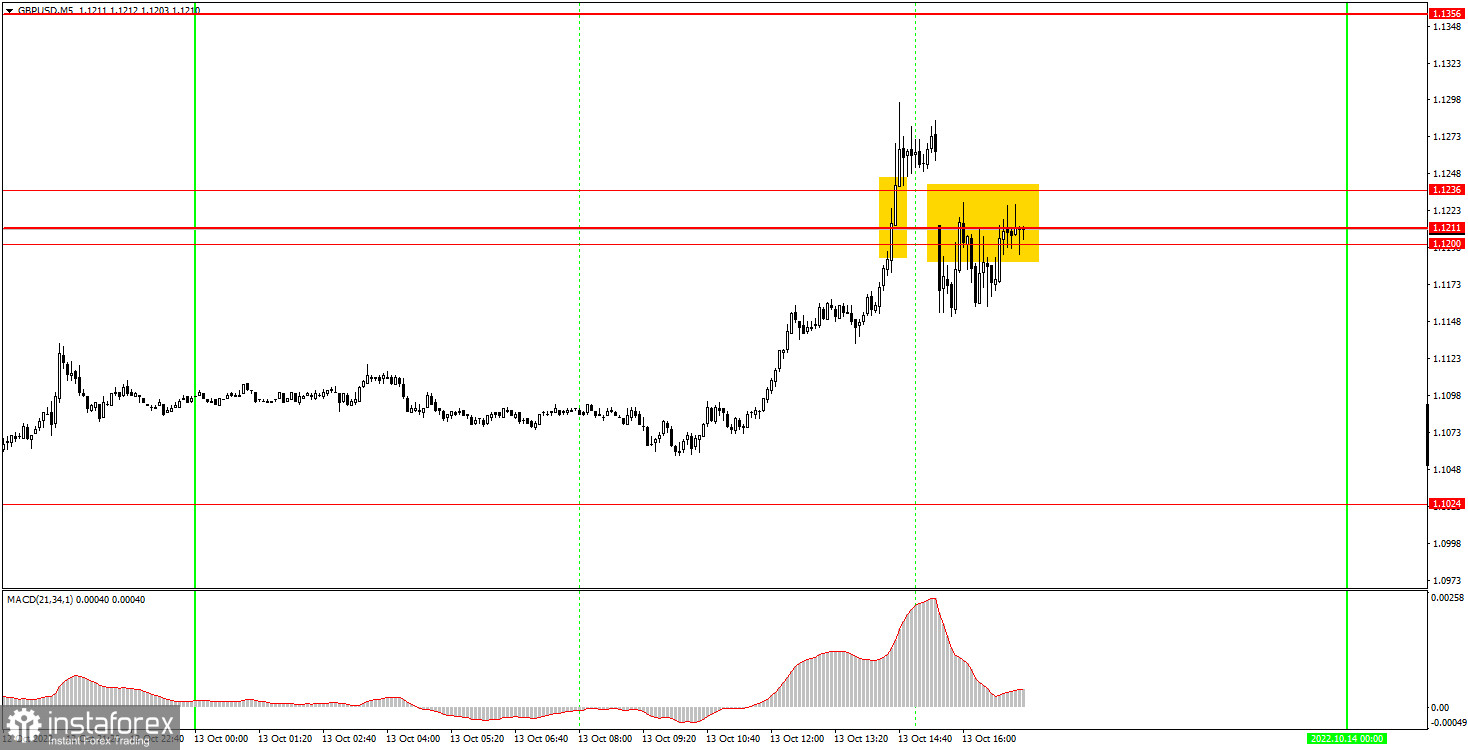 Because of this, it was risky to figure out this signal, especially an hour before the inflation report came out. The second signal is the same way.

When the report on consumer prices came out, the pound fell by 50 points, which was a surprise. That is, a beginner could open a short position 110 points below the last local high.

For the euro, a sell signal showed up half an hour before the release; for the pound, it showed up right at the release time. So, we think that this signal also shouldn't have been turned on.

How to trade on Friday:

The GBP/USD pair is getting closer every day to resuming its long-term downward trend on the 30-minute timeframe.

Even though the British pound has a few more growth factors than the euro, there are still not that many.

The pound could go up if more people want to buy it on the market, but it would be impossible to predict such a move.

Stop Loss should be set to breakeven when the price goes back to where it was after you opened a position in the right direction for 20 points.

In the UK, there are no interesting or important reports coming out on Friday. In the US, however, data on retail sales and the consumer sentiment index from the University of Michigan will be released.

Not the most important news, so people may not pay much attention to them.

Rules of the trading system:

1) The strength of a signal is based on how long it took to form (bounce or overcome the level). The signal was stronger the faster it went through.

2) If two or more trades were opened near a certain level based on false signals (which did not trigger Take Profit or the nearest target level), then all subsequent signals from this level should be ignored.

3) Any pair in a flat can send a lot of false signals or none at all. But in any case, it's best to stop trading at the first sign of a flat.

5) You can only trade on the 30-minute TF using signals from the MACD indicator if there is good volatility and a trend that is shown by a trend line or a trend channel.

6) If two levels are too close together (within 5 to 15 points), they should be looked at as a support or resistance area.

The Support Levels and Resistance Levels show where you should buy or sell the pair. Place Take Profit close to these levels.

Red lines are the trend lines or channels that show the current trend and show which way to trade right now.

There is a histogram and a signal line in the MACD indicator (14,22,3). When they cross, it's a sign that you should buy or sell on the market.

Use this indicator with trend lines for the best results (channels and trend lines). Important speeches and reports, which are always on the news calendar, can have a big effect on how a currency pair moves.

So, when they leave, it's best to trade carefully or get out of the market to avoid a sharp price change in the opposite direction of the last move.

Forex beginners should keep in mind that not every trade has to be profitable. Traders who do well over a long period of time have a clear strategy and know how to handle their money.